Lindsay Drummond is one of Australia's most talented and prolific songwriters and now she has the Anthology to prove it!
Anthology is an amazing offering of 60 original songs and over 4 hours of music! It isn't just an album or 4, it is a real journey. Anthology offers songs written by Lindsay between 1994 and 2014 at various stages of evolution from Demo to acoustic to electronic to full production and includes many many different styles. Also included in the release is a booklet and videos describing the creative process and lyrics to all 60 songs! 20 years in the making this is a herculean effort by a truly gifted singer songwriter, in fact one of Australia's best! Whether they know it yet or not! See for yourself. And be convinced that Fame does not equal Greatness!
WILL BE AVAILABLE MID 2014! 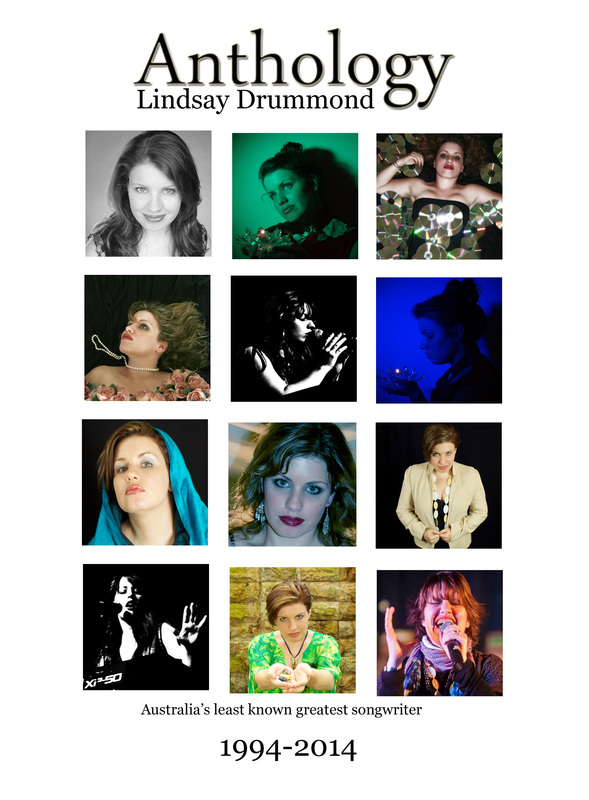 Lindsay touches hearts and minds all over the world with her powerful music. She has been able to create an inspirational career for herself and meet some amazing people along the way! After the success of her debut EP ‘More Than Enough' Lindsay has joined forces with her husband Luke Dixon to bring to the world the new inspirational album 'Songs of Affirmation' as the duo 'Divine Union'. The album features award winning songs that uplift and bring a message like 'The Wish', 'Grace and Ease', 'Be The Change' and many more. The album has already been Hay House Radio's feature album of the month, had a very successful launch in Feb 2013 at The Isobel Menton Theatre- Mary Mackillop Place in North Sydney, had a top ten placing in the Australian Independent Music Awards and has been played on radio stations world wide.

Lindsay has been writing songs for 20 years and has had many incarnations as a singer/songwriter.

She has had record deal offers as the singer/writer in an Australian Rap group and as a Dance artist. She toured around the country with The Radiators and supported Jimmy Barnes with her Comedy songs in Comedy duo The Pointless Sisters. She released, toured and had TV and airplay with her debut EP 'More Than Enough' which gave her the opportunity to play her original music at the State Theatre - Sydney, supporting Jose Feliciano, and tour with Gary Puckett, as well as supporting well known musicians such as Richard Clapton, Brain Cadd and Russel Morris!

'get me thru'- 1st song on lindsay's ep 'more than enough'

Lindsay has written the theme song for the extraordinary Energy Game 'The Wish'  and co-written the theme song for Pip Mackay's (leading Australian NLP coach and Expert on Archetypal coaching)  'Archetype  Academy'.
She has also had her music featured in short films and many a youtube clip.
Lindsay has won numerous songwriting awards and taught Songwriting  at the University of New South Wales.

'The wish'-Inspired by 'the wish' energy game and louise laffey

Lindsay's vast experience and proficiency in songwriting has culminated  in her latest album 'Songs of Affirmation' with fellow
Singer/Songwriter/Producer and Husband  Luke Dixon as the Duo 'Divine Union'.
They have created a mature, heartfelt, expressive and hope laden musical gift in their offering 'Songs of Affirmation'.
It is the epitome of  great writing, great production and great performance and exudes elegance on all levels.
And best of all it is music with a message!

'My husband Luke Dixon is the most amazing and talented musician, singer, songwriter,
arranger, producer and genius I have ever had the honor an pleasure of
working with. This new album is the result of our best work and we are so proud
of not only the music and lyrics but the overall message'. Lindsay Drummond